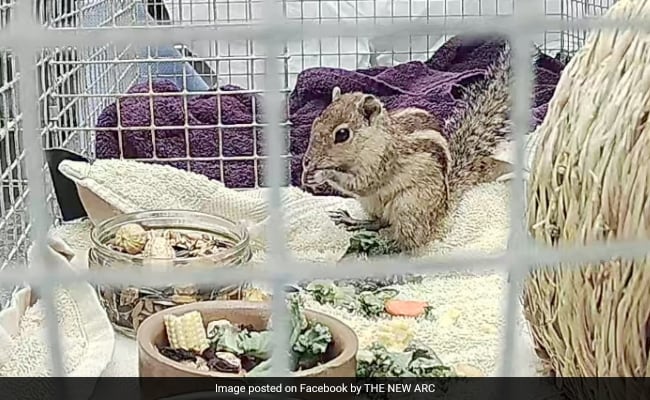 Rescuers gave him the nickname “Zippy” because they saw that he was extremely active, fit and fast.

A squirrel made it all the way from India to Scotland on a boat after traveling hundreds of miles and was rescued by staff from New Arc Wildlife Hospital, North East Wildlife & Animal Rescue Centre, in Aberdeenshire.

A post was shared on Facebook by The New Arc on August 30 with a photo of the squirrel.

According to the message, crew members received a call on August 29 from two locals who work for Pest Solutions in Aberdeen.

They asked if the rescue center would take in the squirrel they spotted on a boat arriving from India. An hour after receiving the call, members of the hospital showed up and secured the squirrel in a pet carrier.

“Our knowledge of Indian squirrels is hardly encyclopaedic, so we used the time between the call and its arrival to quickly inform us of the likely arrival. India has over 40 different species of squirrels ranging from ground squirrels to giant flying squirrels. However, we decided to arrange accommodation for the most likely species which was one of the banded squirrels,” the post added.

The hospital further said it was an Indian palm squirrel, also known as the three-banded palm squirrel, which is the most common type seen in gardens across the country. , the post added.

Rescuers gave him the nickname “Zippy” because they saw that he was extremely active, fit and fast. The Indian palm squirrel spent three weeks sailing the seas on a boat before being rescued by wildlife hospital staff.

According to Wildlife Hospital, Zippy is now in good condition and they have started looking for a new forever home for him.