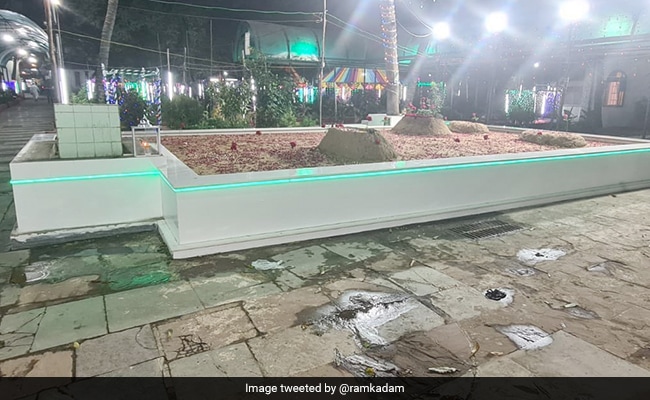 Eknath Shinde said strict action will be taken against those responsible. (Case)

Maharashtra Chief Minister Eknath Shinde on Thursday ensured strict action in the case over the ‘beautification’ of the 1993 Mumbai blasts at the grave of convict Yakub Memon in Mumbai’s Bada Qabrastan.

Meanwhile, according to the sources, the Mumbai police have been instructed to carry out a proper investigation into the matter and also submit a report.

After the lighting arrangements at Yakub Memon’s tomb were removed from Bada Qabrastan, Maharashtra Bharatiya Janata Party MP Ram Kadam asked if it was the ex-Maharashtra chief minister’s patriotism Uddhav Thackeray to convert a terrorist’s grave into a “mazaar”.

“The grave of terrorist Yakub Memon who carried out the Bombay bombings in 1993 at the behest of Pakistan, was turned into Mazar when Uddhav Thackeray was the chief minister. Is it his love for Mumbai, patriotism?” BJP MP Ram Kadam said, demanding an apology from Mr Thackeray.

Memon was the only convict in the 1993 Mumbai serial explosions case who was hanged.

On March 12, 1993, Mumbai (then Bombay) was rocked by a series of bomb attacks that killed 257 people, injured over 700 and destroyed property worth around Rs 27 crore. The case was referred to the Central Bureau of Investigation (CBI) at the request of the state government.

Several other people convicted in this case include Mustafa Dossa and Abu Salem. The attacks were allegedly planned by wanted terrorist Dawood Ibrahim.