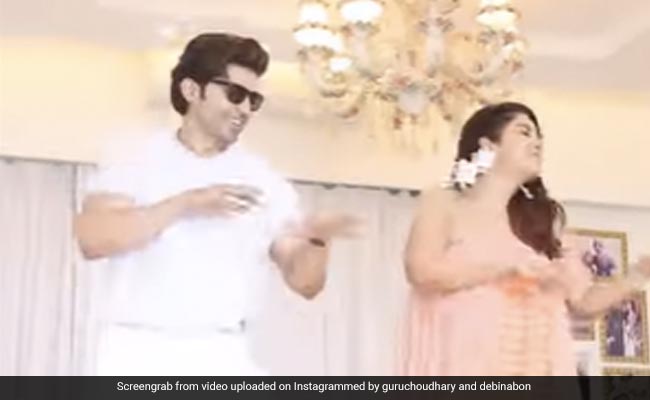 Expecting parents Debina Bonnerjee and Gurmeet Choudhary, who are expecting their second baby, danced along Zoo zoo zoobie Song. On Wednesday, the couple shared an identical video on their Instagram handle. In the video, Debina can be seen dancing with her husband Gurmeet Choudhary. The couple shared the video and wrote, “Together we always create magic” with the hashtags Dance, Reels, Trending, Wednesday, Together, Magic, Gurmeet Debina, Love Dance and Love. The couple was seen in a casual outfit. The couple’s post was soon flooded with hearts and fire emojis from their fans in the comments section.

A day ago, Debina shared two more posts wearing the same outfit as in the video. Debina, who can be seen in a peachy dress, captioned her post, “Life is as peachy as you make it!” while the caption of her other post read, “I’ve got 99 problems but a bad angle ain’t one.”

Check out their posts:

Debina and Gurmeet announced their pregnancy in August in an adorable post. The couple shared a picture of themselves with their daughter Lianna on Instagram in an identical post. Her caption read, “Few decisions are divinely timed and nothing can change that… This is such a blessing… Coming soon to make us complete.” Accompanying the post was the hashtags #babyno2, #mommieagain, #ontheway, # pregnancydiaries and #daddyagain.

Check out some of her posts:

Gurmeet Choudhry and Debina Bonnerjee married in 2011. They welcomed their first child, Lianna, in April of that year. The couple met on the set of ramayanwhere they starred in 2018 – Ram and Sita.