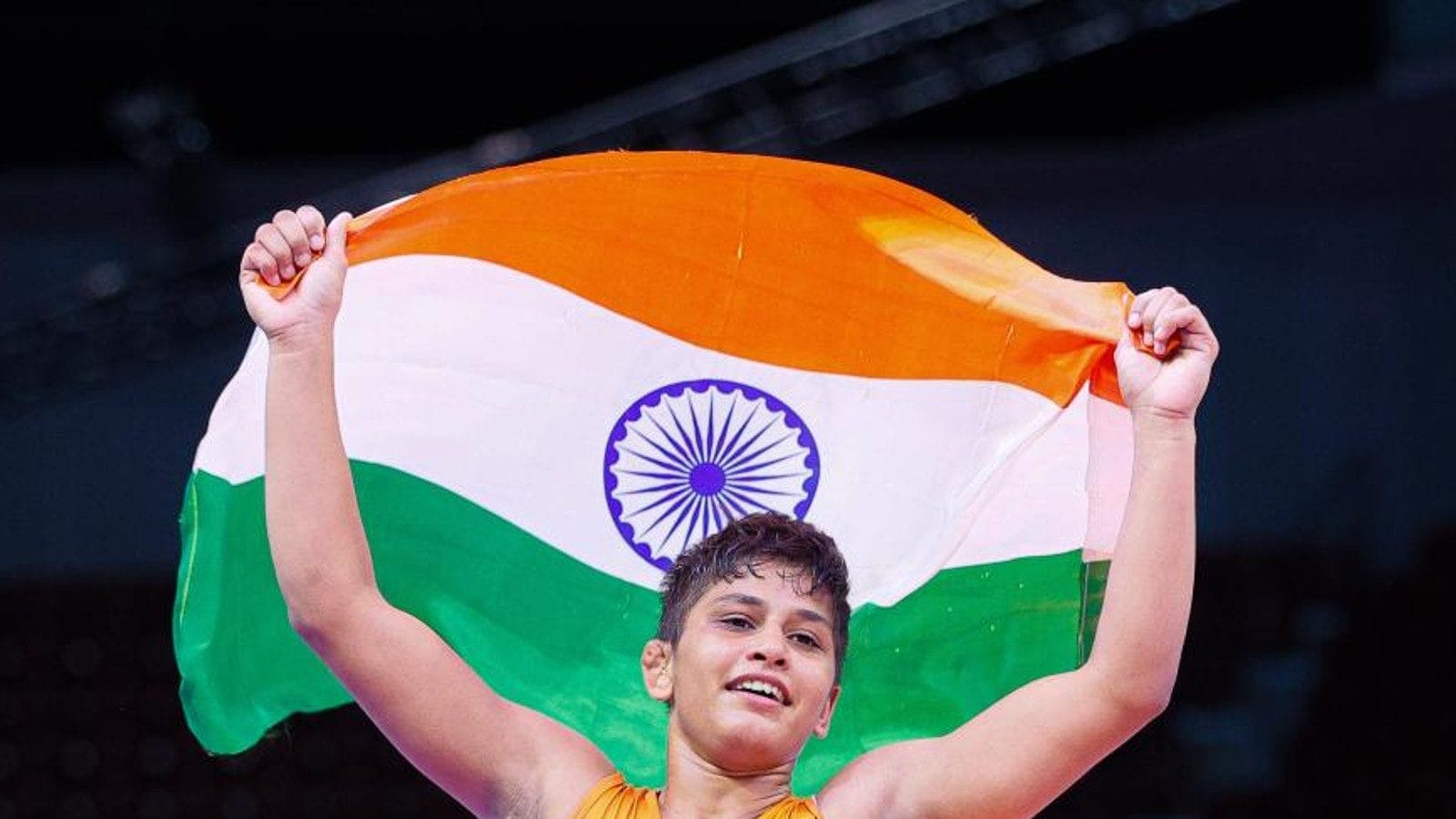 17-year-old wrestler Antim has become the first Indian to win world gold in junior wrestling. She clinched the gold medal after dominating the women’s 53kg field in Sofia, Bulgaria.

She crushed Kazakhstan’s Altyn Shagayeva 8-0 to create history in the final. She marked her dominance throughout the tournament by first beating the European champion Olivia Andrich by technical superiority (11-0) then pinning the Japanese Ayaka Kimura in one minute. Ukraine’s Natalie Klivchutska only narrowly struggled for the full six minutes with Antim but was still outplayed in an 11-2 loss.

Antim obtained the medal after a difficult and challenging journey. However, with the unconditional support of the family, she managed to register her name on the international wrestling platform.

Antim 🇮🇳 with a historic 🥇 for India

The 17-year-old became the country’s first U20 world champion in women’s wrestling at #WrestleSofia pic.twitter.com/YML41jkdDt

In August 2004, Ram Niwas Panghal and his wife Krishna Kumari were blessed with their fourth child. The couple, living in Bhagana village in Hisar district, Haryana, already had three daughters by then. So, they named their fourth child – Antim, which means final/last. In 2004, he symbolized the desire to have no more daughters.

Although Antim’s father, Ram Niwas may not have thought twice before naming his daughter, but on August 19, she became the first Indian to win a gold medal at the World Junior Championships in 34 years. history of the competition.

Hisar’s sex ratio is skewed at 872 women per 1,000 men. In fact, Ram Niwas also admitted the reason why he named his daughter Antim as a mark to end other girls.

“After three girls, we wanted a boy. It’s the custom in our villages that if you have a lot of girls, you give them a name like Antim or Kaafi (that’s enough) so that you don’t have any more. I never really thought about it,” Niwas said speaking exclusively to Sportstar.

“It’s just a custom. If you have a lot of girls, it’s usually very difficult to manage, especially if you’re not very well off. There was a fear as to how you would support their education and how you would manage their marriage. At least that was the thought,” he said.

Although her daughter’s choice of name may portend a difficult future for Antim, she actually owes her father everything.

The family may not have thought deeply about naming customs that could be considered regressive, but their support for Antim has been essential in helping her get better and better.

Antim goes the encouragement to follow the sport of his father. Niwas’ eldest daughter, Sarita, was a national level kabaddi player, and after graduating from the National Institute of Sports, she will start a job at the Sports Authority of India in Bangalore.

“I had been a kabaddi player so I hoped Antim would play that game as well, but it was Sarita who wanted Antim to become a wrestler. When Antim was 10 years old, she took Antim to Mahavir Stadium in Hisar town where there was a wrestling program,” Niwas said.

It was Niwas’ determination to let Antim practice the sport as he voluntarily made the 20 km journey with his two daughters from the village to the sports academy.

“There was a coach, Ms. Roshni Devi, who insisted that Antim wrestle. She said, ‘The girl is good, let her play.’ I had to think about it for four to five months. She kept insisting, sending messages. Pura dabav tha unse (she kept the pressure on). She said, “If you don’t let her play, then give her to me, I’ll raise her,” Niwas recalled.

Ram Niwas had no worries about his daughter’s struggle, but it was a tough and important decision for the family. He said, “I thought if I’m going to put her on, I have to be serious. Bada decision jaldi nahi le sakte hain. Daalna hai toh accha karna hai warna dalna hi nahin (It was a big decision and we couldn’t rush. She had to do well if we enlisted her, otherwise it was useless). It has to be all or nothing. I can’t just put her in the academy and forget about her. Bistar sab le ke aana hai (I had to pack everything and come here). So, I first sent her and her older sister to Hisar and put them in a room for rent near Mahavir Stadium. There was someone who could cook and clean for her. Then, a month later, his mother also went there. The rest of my children also joined them after six months. Finally, I also came here.

Niwas made many difficult decisions for the better future of her daughters. one was the decision to move his family from Bhagana to Hisar to support Antim’s wrestling career. The distance between his village Hisar was barely 20 km, but it was hard enough for them.

Niwas took a rental house but soon realized they had to have their own house. “I also needed a place where I could keep my buffaloes and my family. So, I finally decided to build my own house outside of Hisar. The bison were not negotiable. If my daughter was going to struggle, she had to have the best nutrition. I don’t trust the milk you get in the cities,” said Niwas, who keeps three buffaloes and a cow at the family home on the outskirts of Hisar town.

Antim used her counters to perfection in the final and showed total dominance in the tournament, pinning and beating her…
📸 @struggle
1/1 pic.twitter.com/t5ogcTFB40

Everything has a cost, just like Niwas’ idea of ​​raising girls would be expensive, but not for the reasons he imagined.

“I still haven’t sold most of my land. But I sold almost everything else. I had a tempo truck, a few bikes. and a tractor. I had to sell them. It’s not cheap to raise a wrestler. Paise ki zarurat thi to kuch na kuch to karna padta hai (we needed money so we had to sell). I had to fundraise somehow. At other times, I borrowed money from my friends,” he said.

Niwas recalled that although he used to make proud statements in public about how he happily spent money on his daughter, he had his own worries inside. “Ram ko pata hai, ek kisam ka jua khela hai (God knows, I was playing),” he said.

“I don’t know why I made this decision. I know I thought she would make us proud one day,” he said.

Like Antim’s parents, her coaches also had strong faith in her. They knew she had the spark to do something special. “She had talent from the start,” said Pradeep Sihag, who coached her from the start of her training at Mahavir Stadium in Hisar.

Antim has always been consistent with his performances since the junior age groups. She won the national U-15 title in 49 kg in Patna in 2018 before winning the bronze medal at the Asian U-15 Wrestling Championship in Japan the same year.

Although her medals are safely kept at her home, the most visible trophy is the cardboard cutout of an electric scooter key she was awarded after winning a dangal in Punjab. While there was once a time when her dad used to drive her to practice on a motorbike, but now she rides her own red-colored two-wheeler.

Antim is not yet 18, so she still has two years to compete at the junior level. However, she is already ready for bigger scenes and several years older opponents.

In May of this year, she nearly pulled off a monumental upset. Antim led world bronze medalist Vinesh Phogat 3-0 with 15 seconds left before losing on criteria 3-3 at the Commonwealth Games Trials.

“She stunned Vinesh with her speed early in the game. It was just the lack of mat experience that cost her,” admitted coach Sihag. But this loss would prove to be a catalyst moment.

“Think of how good Vinesh is. She’s an Asian Games champion and a world medallist. And on the other side is this 17-year-old girl. After doing kushti (wrestling) with Vinesh and nearly beating her, she gained the confidence that she was ready to face the best,” says Sihag.

“Because she started competing and winning against the seniors, the juniors are almost very easy for her,” Sihag said.

Antim also inspired his brother, Arpit, the youngest of the siblings. Arpit also wrestles and is a Greco-Roman bronze medalist in the under-15 category in Haryana. He got into wrestling because he wanted to be like Antim. He said: “I really like his aggressiveness. His side attacks are very powerful.

“You wait and see another two years. She is going to be very good. Everyone is going to know his name,” he said.

Antim also thinks her name is her identity and she doesn’t mind at all. She said: “I never thought about it too much or changed it. Right now it’s my pehchan, jaise kushti meri pehchan hai (it’s my identity, just like wrestling is my identity).